Padma Shri Kalamandalam Gopi is a national treasure, adored globally as the face of Kathakali. His majestic portrayals of pacha or pious roles have mesmerized audiences for more than half a century. His stage performances played a crucial role in the revitalization of the art form as he guided an entire generation of artisans while helming the prestigious Kerala Kalamandalam. As the last living artiste to be hired by the iconic Vallathol himself, his vision still sets the tone for all topics concerning Kathakali and performance arts.

Life and Style
He was born in pre-Independence India in the quaint village of Kothachira in Palakkad district of Kerala. He originally began his journey in art with Ottanthullal training, but this would end prematurely due to his teacher vacating the area. A year later, he would discover Kathakali, and his entire life would transform. He pays homage to the Gurus, who groomed him, including stalwarts such as Kalamandalam Padmanabhan Nair, Kalamandalam Ramankutty Nair, Thekkinkattu Ravunni Nair, Krishnan Kutty Warrier of Kalamandalam.

He joined the Kalamandalam at Cheruthuruthy village of Thrissur in 1951. He describes the training at Kalamandalam as taxing and rewarding at the same time. The teachers made the students adhere to strict regimens, but these inculcated lifelong lessons within them. They would wake up at 2:30 AM for classes that would begin after 30 minutes. These sessions would continue until 12:30 PM, with interspersed gaps and contained Uzhichil, Kannu Sadhakam, Mey Sadhakam, Cholliyattam (massages, training for eyes, body). Kathakali performance classes (Cholliyattam) would begin at 3 PM and last for another two hours, followed by mudra training until 8:30 PM. This daily curriculum gives one an idea of the sheer effort involved in training at the prestigious academy. At the age of 20, in 1957, he graduated from Kalamandalam and was appointed as a teacher there.

He believes that while Kathakali prescribes ‘Natyadharmi’ or stylized performances, he has added an element of ‘Lokadharmi’ or non-stylized components to it. He believes that an artist must combine with the human inside celestial beings during a performance. The next generations of artisans must comply with the established norms of the art form while finding a unique way to connect with the audience. The key, according to him, lies in balancing one’s distinctive point of view within the realms of the classical school.

His pacha performances are highly appreciated. Some of his most popular depictions include those of Bhima (Kalyanasougandhigam), Nala (Nala Charitam ), Arjuna( Kalakeyavadham, Subhadraharanam), Bahuka, Rukmangada (Rugmangada Charitam) and Dharmaputra. His excellent footwork and skill, with a mesmerizing array of facial movements, make his performances a truly mystical experience. His shows are especially famous for being sensitive to the emotions of the audience, with the ebb and flow of proceedings being always in flux. 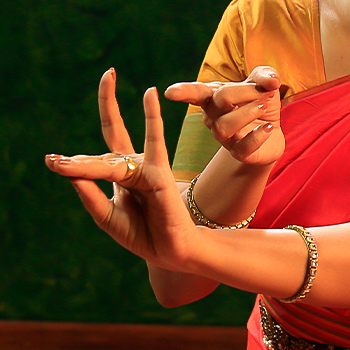