Quest for a higher meaning Lament to the Birds 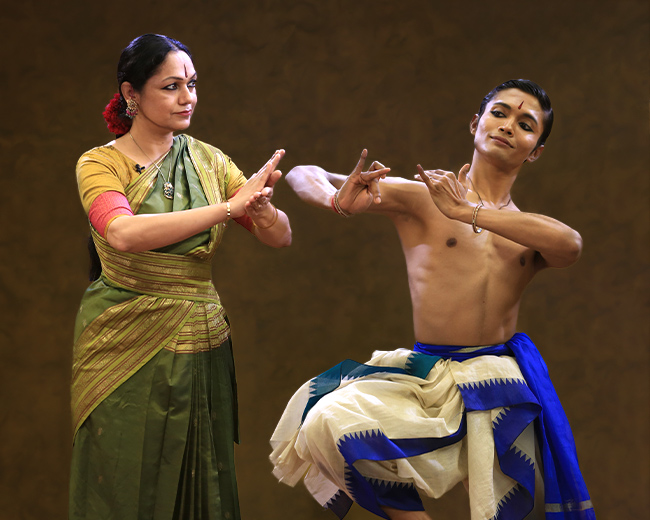 Rama Vaidyanathan took Bharatanatyam to a new era of conscious thinking. Her ability to use her Bharatanatyam compositions to observe the Universe set her apart in the realm of classical dance. She found her own meaning in Bharatanatyam and used the same to showcase her outlook on the mystical that permeates through each of us. Her bond with the spiritual, combined with a knack for instinctually gravitating towards the abstract, has made her one of the most formidable creators in Bharatanatyam.

Her basics were forged under the tutelage of Guru Yamini Krishnamurthy and Guru Saroja Vaidyanathan. With her foundation firm, she decided to break free from the shackles of conventions and define her own Art. Her dance is her interpretation of the known and unknown, and into this infinite space, she leaped headfirst.

She would derive unconventional pieces, pick phrases from different languages and texts, seek meaning in places that people tended to ignore. While it cofounded the purists, her quest for a higher meaning was undeniable based on the sheer earnestness of her approach. An artist going beyond the surface to seek a truer understanding of their art form is a blessing to society. The answers they find tend to resonate with people across all social boundaries.

She hosts a plethora of workshops, disseminating the nuances of Bharatanatyam to an entirely new generation of dancers. Her performances represent the gold standard in Bharatanatyam, and her compositions are among the foremost in sparking conversation on the meaning of life itself. The online course is an amalgamation of the same belief system, where her interpretation of the classics is put forth in a mesmerizing new way.