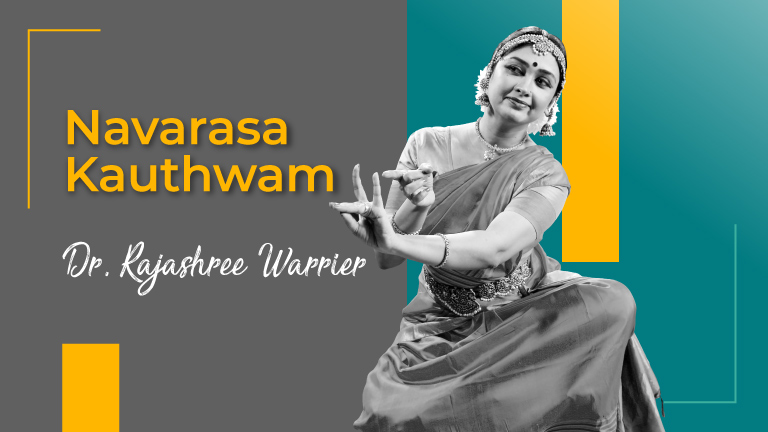 Dr. Rajashree Warrier made Bharatanatyam part of our daily lives. Her persona and technique made this ancient art form more relatable to the public. She is among the most well-known personalities in both Carnatic Vocals and Bharatanatyam today and is a prominent member of the media fraternity. Artists are cultural beacons who inspire, persuade, and support the common man. There is an intrinsic bond that an audience builds with artisans they admire, and these can last an entire lifetime. Dr. Rajashree Warrier embodies these traits to the utmost.

Beginnings in Music
Her affair with Indian classical dance began with Bharatanatyam, where her mentors were Guru V Mythili and Guru Jayanthi Subramaniam. Her lifelong love for Carnatic music is a product of the tutelage of Sri Mullamudu Harihara Iyer, Sri Perumbavoor G. Raveendranath, Padmashri Vidushi Parassala Ponnammal and Guru B. Sasikumar. These maestros honed her skills, imbibing a love for teaching, studying, and disseminating Indian Classical music to the masses.

Style and Appeal
Famous both for her Bharatanatyam skills and her Carnatic vocals, her training sessions are highly sought after. Her Sampradayam draws from both the Vazhavoor and Pandanallur styles, as she believes Bharatanatyam has no fixed boundaries. She pushes the artist to focus on his artform and avoid the tendency to stick to solely standardized renditions. Her approach embodies a stronger bond with the Sahrudyas via their art. She molds the worlds of dance and music into an amalgamation that epitomizes a true artisan's powerful will.

Her performances are odes to the simple pleasure of pursuing something you love. She draws on her viewers' needs, providing them with a reprieve from the rigors of routine. She introduced Nattumozhi, which added regional or colloquial words into the performance. This act helped her build a deeper bond with her viewers, who have followed her career with dedication and reverence for decades.

Work
She has a wide range of Bharatanatyam productions, including Bhagothy Chinthu, Lanka Lakshmi (adaptation of Malayalam play), Ashtaiswaryam (elaborates the eight qualities that can be achieved through deep meditation), Swathi Smrithi, Mira (theatrical work on the story of Mirabai) , Shades of Love (thematic work on the romantic journey of a woman), Shikhandi, besides those based on compositions by M Balamurali Krishna, padams of Irayimman Thampi and varnams of the Tanjore quartet. She released a unique videos titled Neela Varnam, which contains eight melodious compositions on Lord Krishna. She also narrated a video series consisting of tales based on the Panchathanthra and Jataka Tales, titled Great Indian Stories. She became a fixture in people's lives for four straight years with her Suprabhatham, a breakfast show on Asianet, a Malayalam TV Channel. She would then go on a quest to study Varnas in dual forms, culminating with a Ph.D. in Music from Kerala University.

Awards and Honours
Dr. Rajashree's journey has received recognition from many quarters. These include the Devdasi National Award (2014), Kalasree Title and Kerala Sangita Nataka Academy award (2013), and the Mahila Tilak Title and Award conferred by the Social Welfare Department, Government of Kerala (2012). She is also the founder-director of 'UTTARIKA, Centre for Performing Arts,' where Bharatanatyam training and research are prioritized.

Online Classes
Today, these online classes are yet another way to connect and learn from this Maestro, whose technical knowledge and on-stage presence are among the finest seen in all of classical dance. Her concerts are a true glimpse into her being, as her voice and performances both enchant massive crowds annually. 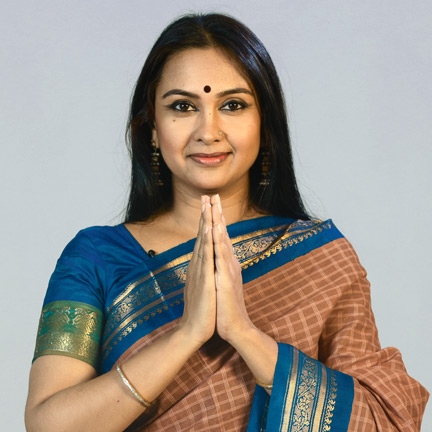 We will be available to give you technical assistance via zoom chat or phone, during the course of the webinar.